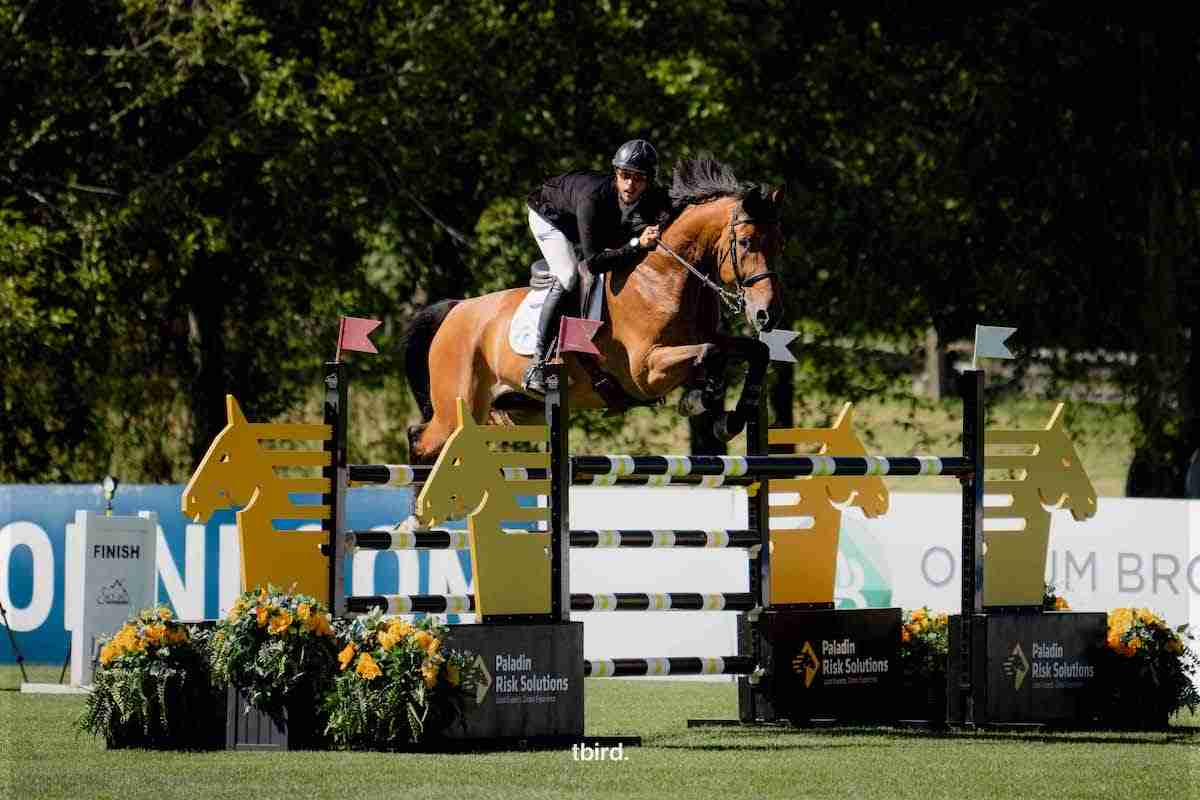 Long-term partnerships are becoming synonymous with the West Coast Classic in 2022. Friday afternoon, Justin Prather (CAN) took the victory in the $5,000 1.40m Welcome at Thunderbird Show Park aboard EZ Ace, a horse he’s had since it was just three years old.

Over the Peter Holmes-designed track on the Fort Grand Prix Arena, 10 pairs jumped clear first rounds to advance to the jump-off. But it was Prather atop the leaderboard in a time of 38.70 seconds as the class came to a close. Thursday’s U25 victor Hayley Mercer (CAN) and her partner of six years, Crown Royal, took second in 41.26 seconds. Katie Kruger (CAN) rounded out the top three with Goodwill VB in 42.12 seconds.

“He’s really fast across the ground,” Prather said of EZ Ace’s strengths in the jump-off. “He’s always been quick but now he’s quick and paying attention to the jumps, so there are lots of places to jump on an angle — land and go and turn — and that’s kind of his thing. Takeoff and landing never slow him down. As long as you can keep going, it’s pretty fast.”

EZ Ace is coming off a 1.40m hot streak, winning two consecutive 1.40m Classics at tbird this spring. But Prather didn’t initially get any say in owning the horse. “I was actually told we owned him after he was bought,” Prather recalled. “My dad bought two horses and told us later. [EZ Ace] just showed up and he was kind of cool but also difficult, but now it’s channeled.”

Though Prather has owned the horse for 10 years, he passed the ride to a few other riders until EZ Ace turned eight. Prather admits the 12-year-old gelding (Ace x Heartbreaker) is not the easiest on the ground.

“He’s got a lot of attitude — that’s the PG way to put it,” he said. “He’s hard to handle because he gets excited; he’s like a big dog. He doesn’t realize he’s four times as big as you. But he’s a good dude and he jumps, he’s just annoying a lot of the time. Figuring him out took trial and error and good people giving good advice. The ride isn’t so bad and I’ve ridden him for so long that that part is easy.”

As for his plan for the class, Prather knows he can’t let other riders’ rounds impact the way he approaches the course. “I don’t watch anyone else when I’m on him because half the time I can’t even keep track of his strides because we’re going sideways bucking,” he continued. “I just go ride and see what happens. But everywhere he goes he always knows where he’s going so he’s really efficient. It’s often difficult but it also makes him fast.”

As Prather gears up for Sunday’s $20,000 Grand Prix 1.40m, he knows he has EZ Ace exactly where he wants him. “Over the last few years we’ve tried to jump bigger,” he said. “I tried to take the approach this year to jump where he’s confident and competitive and use him to cover the young horses’ bills. It’s the ‘pay it forward’ plan rather than the selfish plan of just trying to jump bigger.”