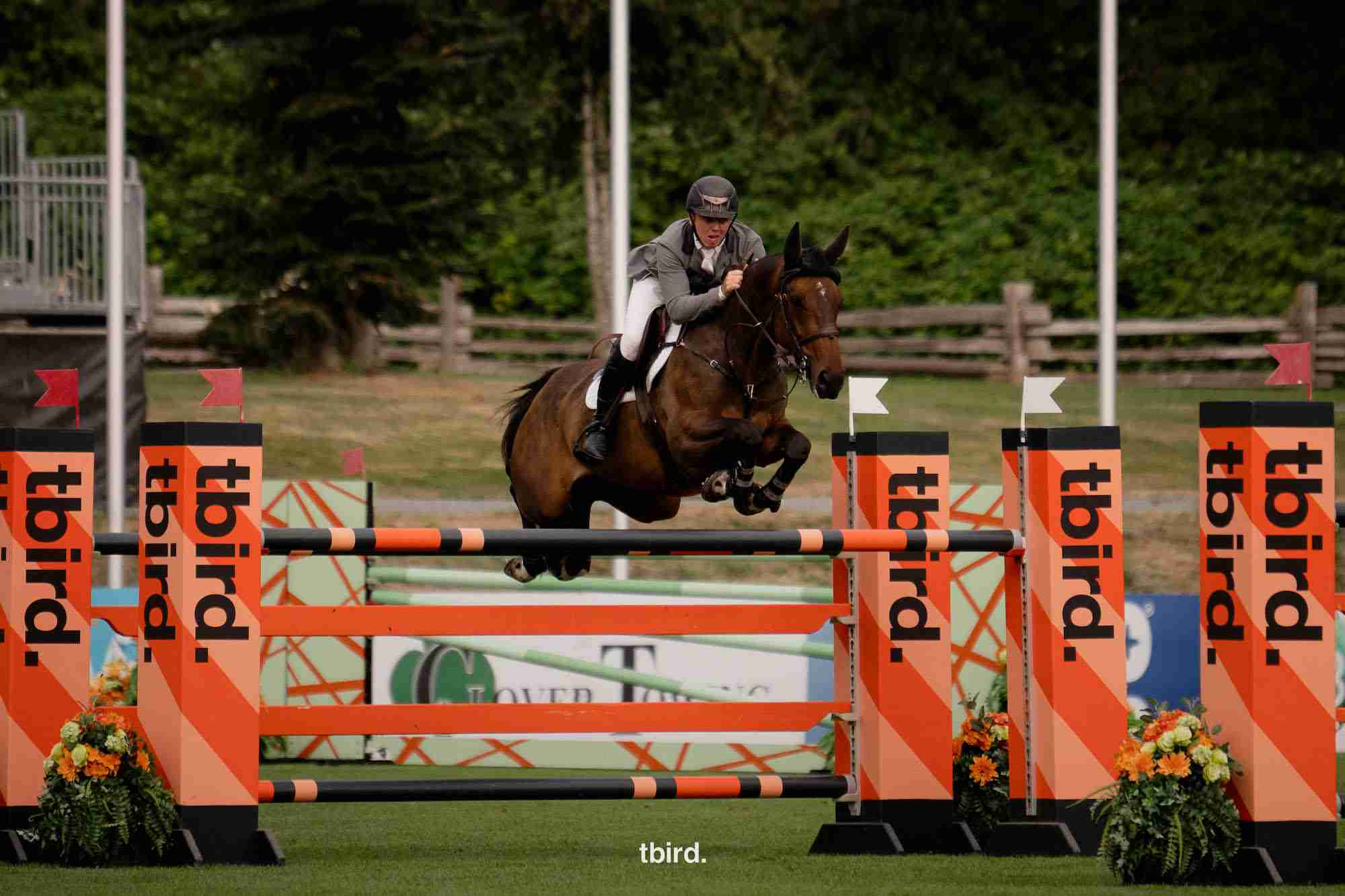 Langley, BC – Aug. 10, 2022 —Matthew Sampson (GBR) has quickly made an impression in his Thunderbird Show Park debut.

The 31-year-old managed to beat the venue’s winningest rider in Conor Swail (IRL) in the feature class of the Summer Fort Welcome’s opening day. He and the Evison family’s Curraghgraigue Obos Flight won the CSI3* tbird Speed Wednesday in the most memorable of fashions: The pair’s winning margin was just one one-hundredth of a second.

The winning time over the 1.45m track was 63.84 seconds. Swail and Gamble were relegated to second with their 63.85-second time. Kyle King (USA) and Etalon finished third (64.85 seconds).

Peter Holmes’ track offered choices, and Swail took the most expedient track available, utilizing the open water option on course. But Sampson had natural quickness—and a hot streak—on his side. He and the 10-year-old Irish Sport Horse entered the Summer Fort Welcome off a tremendous Spruce Meadows circuit in which they won an eye-opening five classes at the two- and three-star levels.

“Conor [and I] kind of did similar strides around the course,” Sampson said. “I think my horse is probably naturally a bit quicker than [his], but Conor did the option to the water jump—which I didn’t do—which was definitely a quicker option. So, I kind of brought us back on level terms, and I think just luckily I was on the right side of the time.”

Sampson and “Jack” have been partnered for the last three years, after Sampson acquired the ride when the bay was seven, from the horse’s breeder, Baden Powell.

“I just loved his character. He’s is very ‘gamey,’ I’d call it. He really wants to win, and he’s ultra careful, and you know, he’s fast and he’s brave,” Sampson said. “He’s just an all-around good horse, really. And I felt like that the first time I kind of jumped him. He actually won at the Dublin Horse Show as a 4-year-old, which is quite a big deal in Ireland.”

But a big part of Jack’s success has been his management. Despite his winning record, Sampson hasn’t been tempted to test him too much. He excels at the 1.40m and 1.45m heights, with just one start at 1.50m this year.

“I don’t ask him to jump big every class, just because he gives so much heart in every class he jumps,” Sampson said. “But he’s just so consistent around the ranking classes.

Tickets are available for the week’s feature, the CSI3* ONNI Grand Prix, set for Sunday, Aug. 14 at 2pm PT.