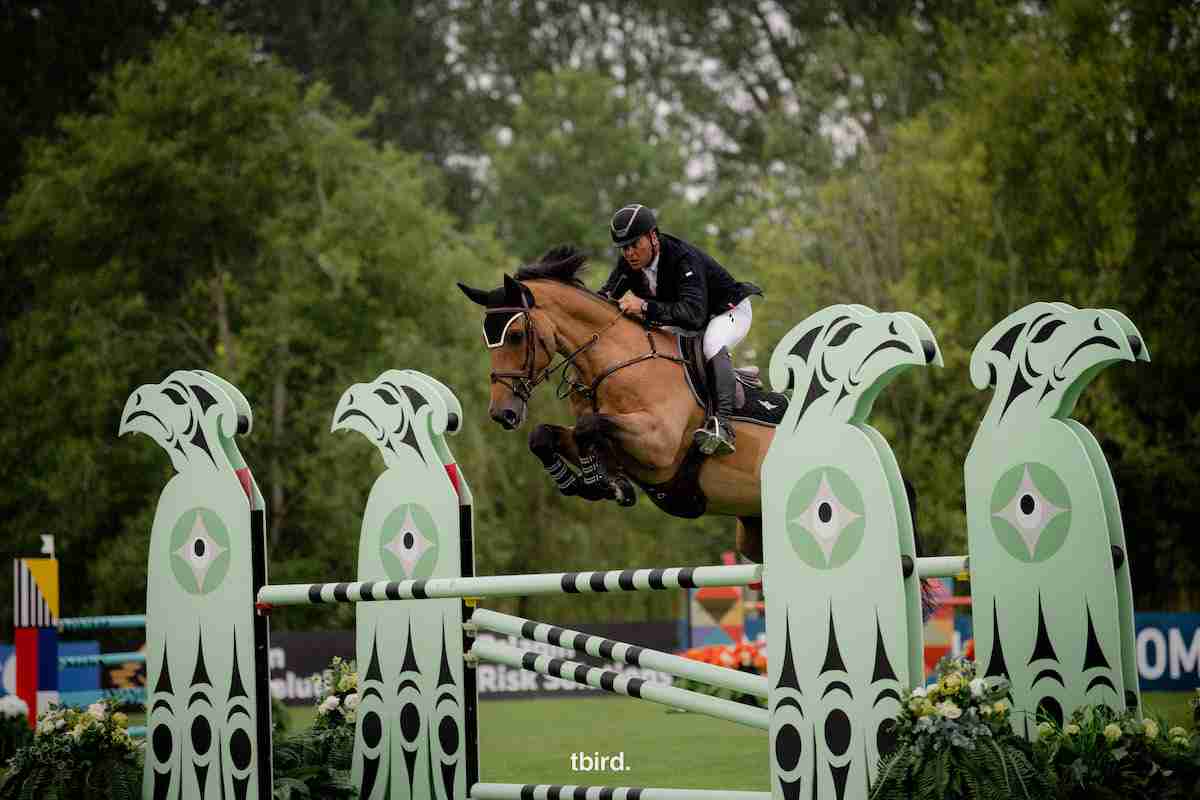 Nine pairs jumped clear in the $20,000 Grand Prix 1.40m Sunday afternoon at Thunderbird Show Park. Hometown hero Kyle King (USA) made up one third of that lineup. With three attempts to top the class come jump-off time, King sealed the deal with the final horse on course, Dustin 254.

“He was probably my most experienced horse in that class today but I was not expecting him to be the fastest,” King said of Dustin 254, a 15-year-old Westphalian gelding (Dollar Du Munier x Falkenhof’s Lancer). “He was my last horse to go and I thought I was even a little conservative at the beginning but he stepped up the last few jumps and we ended up winning it.”

King’s first ride, Sig Chiari, set the pace to catch in the jump-off on a double-clear effort in 42.37 seconds. Samantha Buirs-Darvill (CAN) caught him with Chic D Emma Z in 40.27 seconds, but he still had two shots to reclaim the lead. He fell just short with Kerri Volek’s Ittolo in 41.39 seconds, then put it all on the line with Dustin 254, owned by Aren Ozker, securing victory in 39.27 seconds. Buirs-Darvill claimed second place honors and King’s mount Ittolo took third.

Sunday’s win was proof that good things can come from less than ideal situations in this sport. “I owned this horse for a couple years with Stuart Belkin and I had some good results on him,” King said of his past with Dustin 254. “About a year ago I sold him to a client, Aren Ozker, a young rider with U25 dreams. Unfortunately, he had a slip on his other horse about a month ago and broke his foot, so I took him [Dustin 254] back over.”

Ozker was present to watch his horse win the biggest class of the week, hopefully a strong omen for the future when he is back on board.

For King, the week served as an ideal opportunity to gain more mileage on his younger mounts. “It turned out to be quite a marathon for me; I had six in the Welcome the other day and had four jump off, and today I rode five and had three in the jump-off, so it was a lot of work. But it was a nice course, a typical Peter [Holmes] course on a beautiful field with good footing. It was really nice to get all the younger horses and inexperienced horses into the big ring.”

Coming off wins up to the CSI5* level over the past year, King feels confident in his current string of horses. With a farm just down the street, tbird is like home to King and his entire operation.

“My string is great; I feel awesome,” he expressed. “I was at Spruce Meadows [in Calgary] but it made more sense with this string I have right now to come home and try to develop some young ones. It worked out perfectly. All my young riders are doing great, the weather’s been nice here, and this is my local spot. It’s a great show.”

The Western Family kicks off Wednesday with another week of national competition on the west coast of Canada, culminating in Sunday’s $20,000 Odlum Brown Ltd Grand Prix.