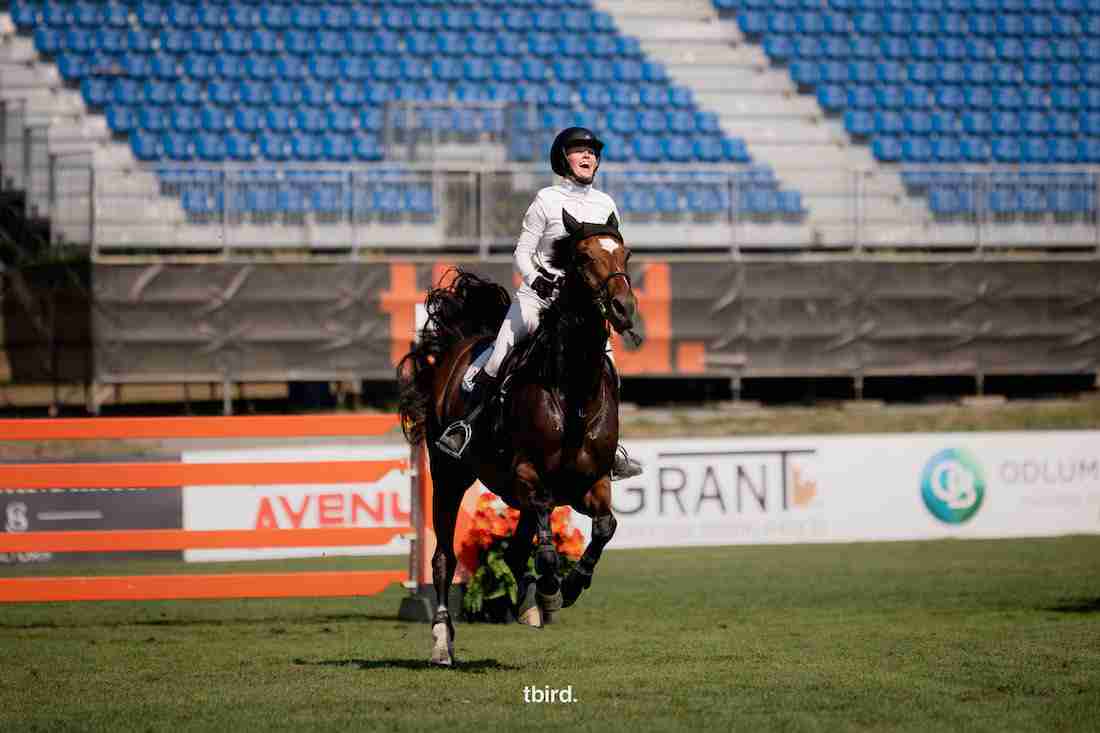 Taylor Winther Blair (CAN) made her U25 debut just one week ago with Cella at the Summer Fort Classic. In the first U25 event of the Summer Fort Festival, she and her homebred mare Cella topped the MarBill Hill U25 1.35m.

Besting a six-horse jump-off, Blair and her 9-year-old Canadian Warmblood mare crossed the times of Peter Holmes’ (CAN) shortened course in the most jubilant of fashions, with a winning time of 40.46 seconds. Kassidy Keith (CAN) and Fenelon WF (41.06 seconds), with Stella Chernoff (CAN) and Connador third (41.52).

“I just kind of went out there planning to be efficient, and everything just showed up exactly how I wanted it!” exclaimed Winther Blair, 19. “That’s the best my mare has felt out there [in the last] three weeks [at tbird]. She came out ready.”

Holmes’ jump-off wasn’t just a speed test, as the final fence continued to pose a technical question as a careful plank vertical. That is where Winther Blair believes she got the winning edge.

“It was easy to add one up: It was a tall skinny vertical with a plank on top,” she said. “I landed off the oxer [before it] and kicked [Cella] up into my hand, and off we went. We found it exactly how I wanted it!”

Winther Blair and her mother Sorine Winther have produced Cella together, with help from Lisa Carlsen and Dayton Gorsline at shows. Cella is by the stallion Cabardino and out of Ganadora Negra, a former mount of Winther.

“We bred and raised her. She was actually born in the middle of my mom and stepdad’s wedding ceremony, so she’s an official part of our family,” Winther Blair said. “My mom had her [to show for] a couple years, and I took over when she was a 6-year-old.

“This is both my and her first time at the height,” she added. “She’s 15.3h: She’s little but mighty! She has the biggest step out of any horse in the barn.”

About to begin her third year of undergraduate study in biology at the University of Northern British Columbia, Winther Blair has her eyes on getting accepted to veterinary school—and continuing to produce her exciting homebred partner.

“I stayed [close to] home to keep riding!” she exclaimed. “We’ll come around [to tbird] again in September. I’ll fly in and out. I’ll go to school during the week and show on the weekends!”