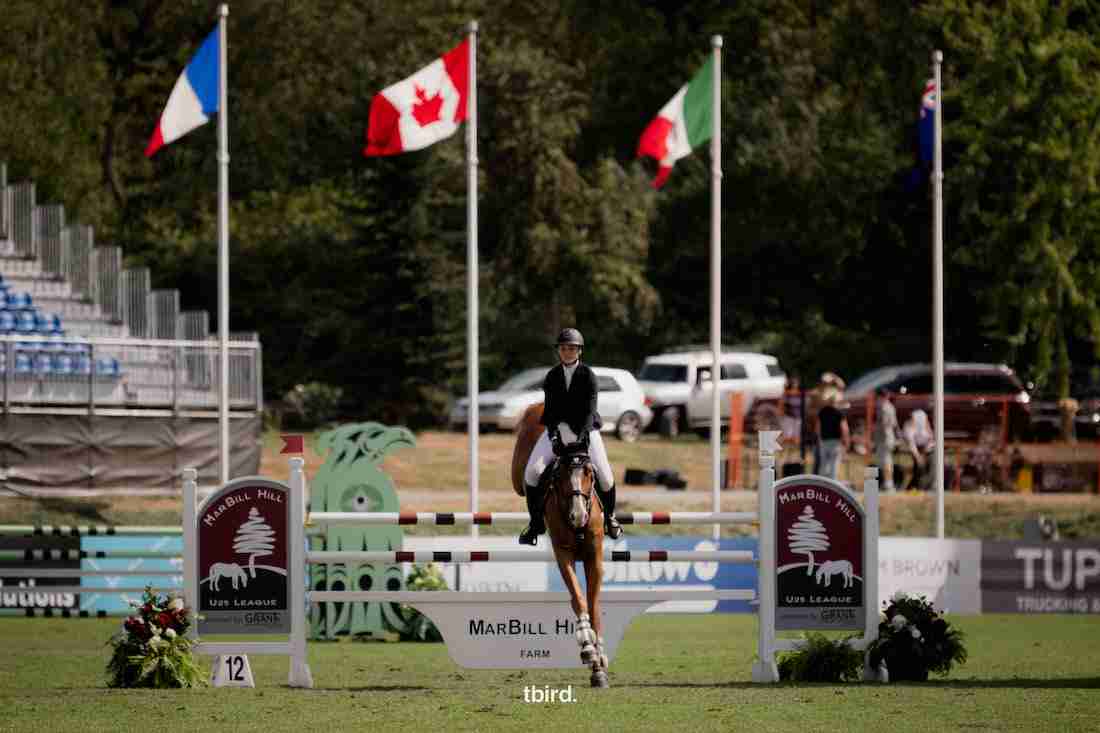 Olivia Stephenson thrives off a fast pace—and not just in a jump-off.

Stephenson, 16, rode Deister Z to the win in Sunday’s MarBill Hill U25 Grand Prix at tbird, besting a four-horse jump-off.

She acquired her mount as a birthday present—just last week—and Deister Z himself was imported less than two months ago. Needless to say, things have come together quickly.

“This class was probably one of the biggest tracks I’ve ever jumped,” Stephenson said. “Last week, we jumped in [the U25 division], but we didn’t do the Grand Prix, because we didn’t want to show too many days in a row. This was a bigger, harder track today. I was pretty nervous going into the first round, [but] in the jump-off I was a lot more confident.”

Peter Holmes’ (CAN) 1.40m track proved challenging, and just two riders had produced clear rounds more than two-thirds through the start list. But when Kassidy Keith (CAN) and Aren Ozker (CAN) delivered back-to-back clears at the tail end of the first round, it doubled the jump-off field to four.

Still, clear rounds remained a rare commodity over the short course. Stephenson was the first to jump double-clear, and ultimately no one would catch her. Ozker and Dustin 254 finished second (51.71 seconds), with Stella Chernoff (CAN) and Connador third (4/47.62).

“Stella went before me and had a rail. I was just wanting to go for a clear round, and I just stuck with the plan [trainers] Dayton [Gorseline] and Lisa [Carlsen] told me to do,” Stephenson said. “He was very good.”

Stephenson first met Deister Z in June, when the gelding was at tbird with international show jumper Gareth Graves (CAN) to sell. Having only recently been imported from Greece, Deister Z was in need of some fitness, but Stephenson and the chestnut immediately connected. She took Deister Z to a show in Calgary and showed once more at tbird before the partnership became permanent.

“One of reasons really liked him from the start was that he has such a good canter. He has so much natural impulsion,” Stephenson said. “His stride is so adjustable, and he has just enough blood. He’s easy to ride [and] so sweet in the barn. We call him a Breyer horse: He has such a cute face, with white on his face and white stockings.”

According to Stephenson, horse and rider have become equally attached.

“He loves our horses. He’s very attached to them, [and] some days he thinks he should have a companion all the time,” Stephenson said. “He has his routine: He sleeps every morning from 8 to 10 after his breakfast. He’s so sweet. My little sister (12 years old) takes him on hand-walks.”