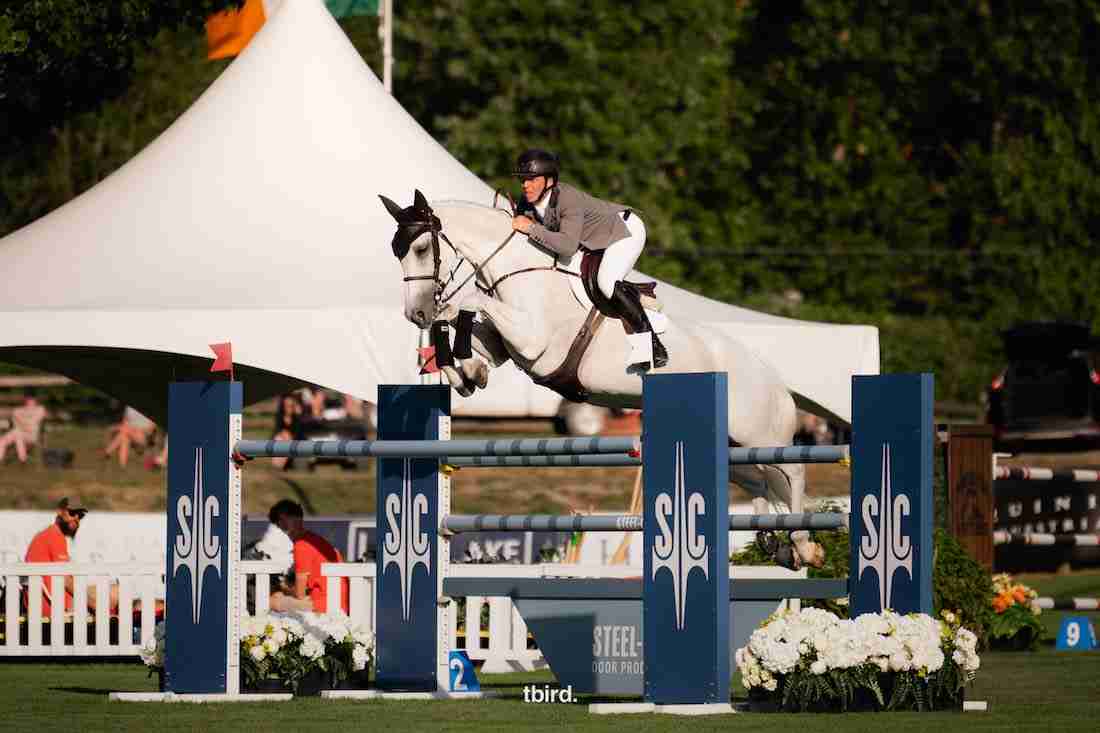 Matthew Sampson (GBR) did not take long to start a winning streak at Thunderbird Show Park. In his first trip to Langley, he won his second international competition in the span of three days Friday, topping an eight-horse jump-off in the CSI3* Steel-Craft Doors Cup with Ebolensky.

It was a comfortable victory, both in appearance and as indicated by the clock. The pair posted a winning time of 37.86 seconds. Karrie Rufer (USA) and Stern dei Foletti came closest (38.33 seconds), with Vanessa Mannix (CAN) and Catinka 25 third (39.8).

“Ebolensky has such a big stride,” Sampson said. “I just tried to keep it smooth and hope it was enough. I didn’t want to go crazy, because she’s going to jump the [CSI3* ONNI] Grand Prix on Sunday.”

Peter Holmes’ (CAN) 1.50m track flowed rhythmically around the expansive Fort Grand Prix arena, and the 21-strong field bounded across the pristine grass surface, with nine producing a clear first round effort. When Jamie Gornall (GBR) elected not to return for the short course, it shrunk the jump-off field slightly to eight, and Mannix set the tone as the first rider to return. Sampson and Ebolensky, however, created separation with a most expedient turn back to the vertical at Jump 7 and a bold gallop to the penultimate line, for which he didn’t take a pull at the reins.

“She’s an amazing horse,” Sampson said. “It makes my life so much easier.”

Sampson and Ebolensky, whom Sampson owns in partnership with the Evinson family, have had a successful summer, having also won the CSI5* AKITA Drilling Winning Round at Spruce Meadows in July. The pair jumps clear 63% of the time at 1.50m, according to JUMPR App. Sampson has had the now 13-year-old mare since she was just seven.

“She’s a strong character. She knows what she wants,” Sampson said. “I kind of just go with her. She’s a little bit fussy in the mouth sometimes, but the more you try to correct her, the more she’s like, ‘Leave me alone. I’m going to jump anyway!’”

Simple is best for Ebolensky, who goes in minimal tack. She wears no martingale and prefers a soft bit.