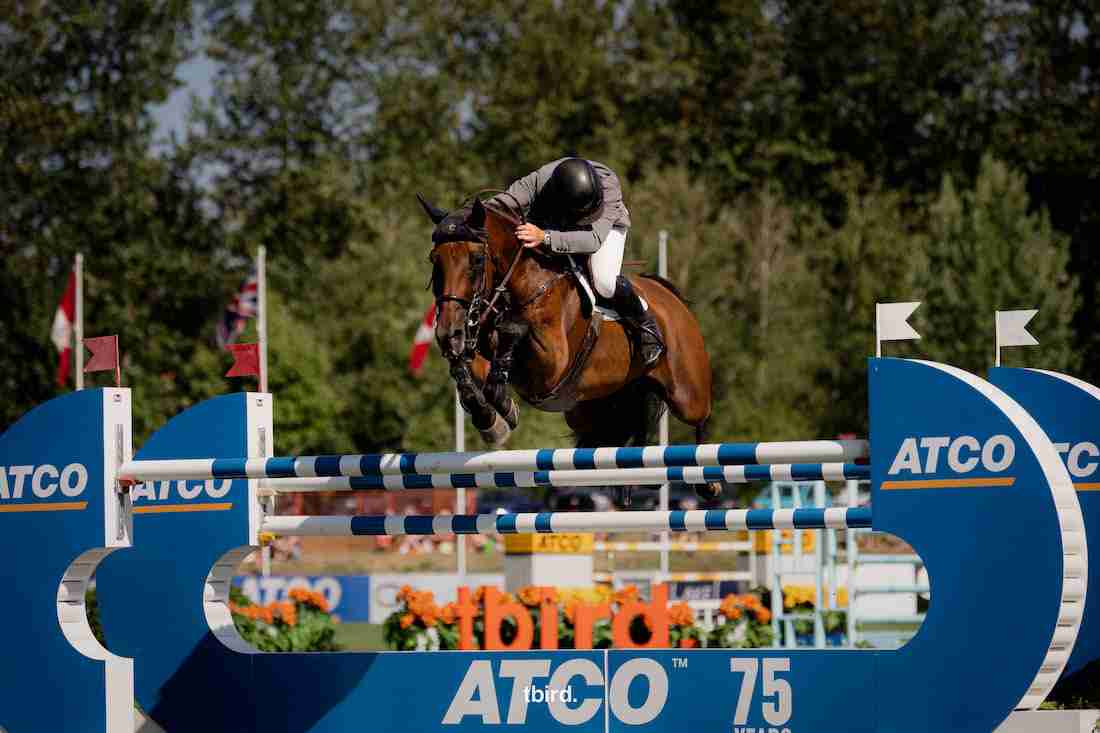 Ten-year-old Oldenburg mare Elisa BJX has plenty of experience going against the clock. After all, she and rider Matthew Sampson (GBR) topped the Maui Jim Grand Prix 1.40m at the Summer Fort Welcome by nearly three seconds.

The mare is less experienced jumping the 1.50m height, but when Sampson entered the Fort Grand Prix Arena for the jump-off of the CSI3* ATCO Cup Grand Prix 1.50m, Sampson had a decision to make about how much he would chase the then-leading pace of Robert Blanchette (IRL) and Chardonnay.

He went for it, and the mare answered the call for an emphatic victory, crossing the timers of Anderson Lima’s (BRA) short course in 40.13 seconds. They kept a late charge from Karrie Rufer (USA) and Stern dei Foletti (41.18 seconds) at bay, ultimately relegating Blanchette and Chardonnay to third (42.15).

“I thought, ‘It’s not very often you get to be in a Grand Prix at a show like this in the jump-off,’” Sampson said. “She’s 10 years old, so she’s old enough to give it a go, and she just rose to it. That’s what good horses do.”

Elisa has proven to be a quick study. The mare jumped her first 1.50m track just two days ago in tbird’s CSI3* Uryadi’s Village Cup. Sunday, Elisa and Sampson were one of nine first round clears, with eight electing to return for the jump-off.

“She [jumped] 1.50m on Friday, and we had two mistakes, but she just learns. She’s clever,” Sampson said. “In the first round, she felt really good but a little inexperienced in places. In the jump-off, she felt amazing.”

Sampson first rode Elisa in Mexico—the home of owner Salvador Onate—before the mare joined his string in June at Spruce Meadows. Sampson credits a lot of their success to the month in between that circuit and his trip to tbird.

“It’s difficult to get to know the horses at the show when you’re trying to compete with them, because you don’t really get that time for them to get to know you and vice versa—to create that bond where she trusts me,” he said. “I think we’ve really got that now.”