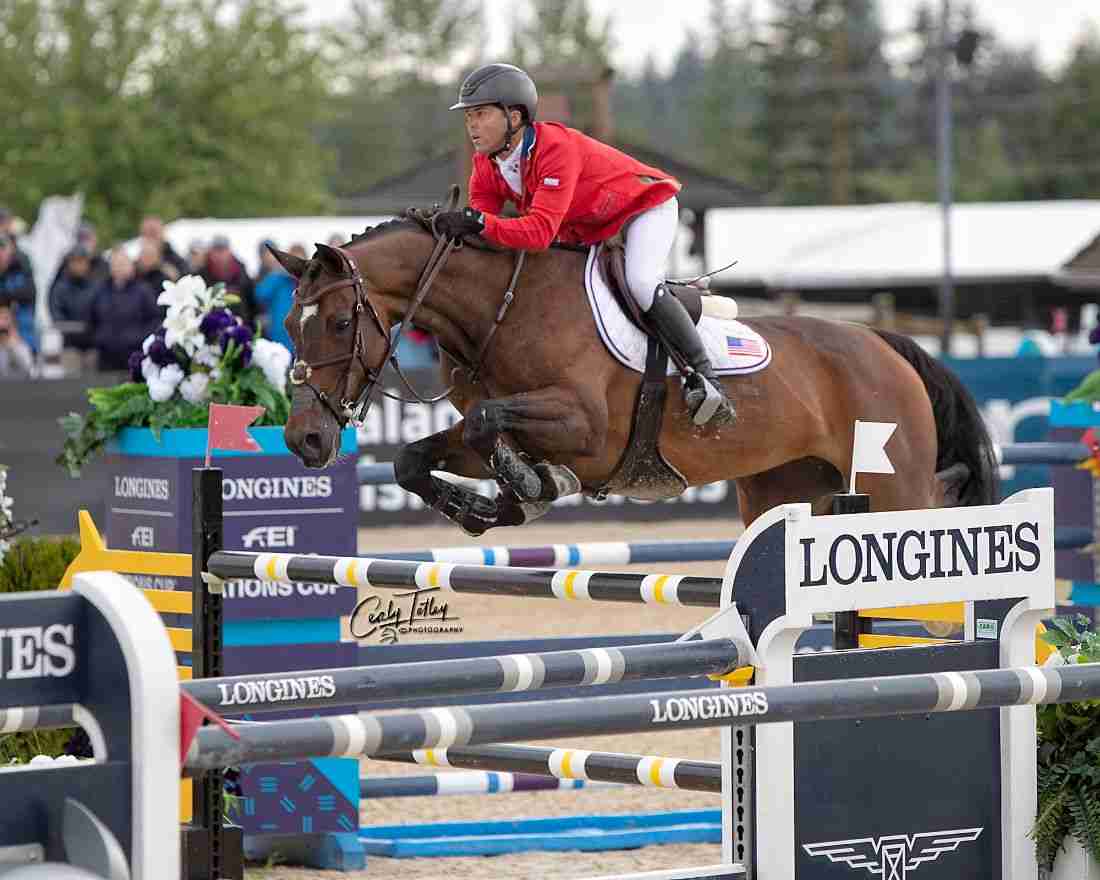 Langley, BC – The list of five-star grand prix victories for World Kent Farrington (USA) is lengthy.

The victory, which came over an eight-horse jump-off, also marked the first at the level for Farrington’s talented mount. Last to contest Peter Holmes’ (CAN) short track, the pair jumped straight to the top of the class, crossing the timers in 42.04 seconds. Jose Alberto Mirtinez Vazquez (MEX) and Quinley finished second (43.92). Katherine Strauss (USA) and Cincinnati Kid took third (44.74) as the only other combination to execute a double-clear performance.

“Orafina is a very special horse,” Farrington said. “I started working with her about two years ago, and she’s very careful. She’s obviously extremely fast, [but] she’s a very particular horse. She’s so easy to ride, but she’s really an incredible athlete and starting to come into her own.

“This is our first five star win, and I’m so very proud of that today. It was a great first round and a great jump off.”

Weather played a role on the day, with storms forcing the feature class of Friday’s Odlum Brown BC Open program to be moved from the Fort Grand Prix Arena on the grass to the Thunderbird Jumper Arena on sand. In the first half of the class, five clear rounds were produced in relatively quick succession, but only three more pairs would add their names to the jump-off list as conditions cleared.

“My hat’s off to management here for making do with what they had to work with. Luckily, they have a great sand arena here in addition to their great grass arena,” Farrington praised. “So we were able to move it. I think for the best competition [and] for the safety of all the horses and riders that was the right move.”

Tight rollback turns, a wide liverpool oxer and a gallop lane to the final fence defined a technical jump-off. One by one, athletes focused on turning to shave precious seconds off the clock, but Farrington also had footspeed on his side to accompany his willful mare’s carefulness. The duo remained ahead of the curve from the moment they crossed the start timers.

“She’s hyper aware of everything going on around [her], so that’s not always the most comfortable ride,” Farrington said. “But I think that those [types of horses] are the exceptional athletes that we have in our sport.”

Over the course of the last five months, Farrington has calculatedly stepped his mount up to her first five-star grand prix events, and the mare has been knocking on the door of a win, including a runner-up finish at the level in Wellington (USA). At Windsor (ENG) last month, the pair again finished among the top 10. According to JUMPR app, they produced a clear effort at 1.60m with a 69% success rate. The key to success has required a bit of give and take.

“I think part of making the most of her athletic abilities is finding a way to work with her, some compromises in the controls and in the riding. That’s how we get the best performance as a team,” Farrington said. “I think the future looks bright [for her]. She’s a great talent, and I think she has a great will to win and to please. We’ll see where it goes, but she’ll let me know what she wants to do. I have no doubt about that.”