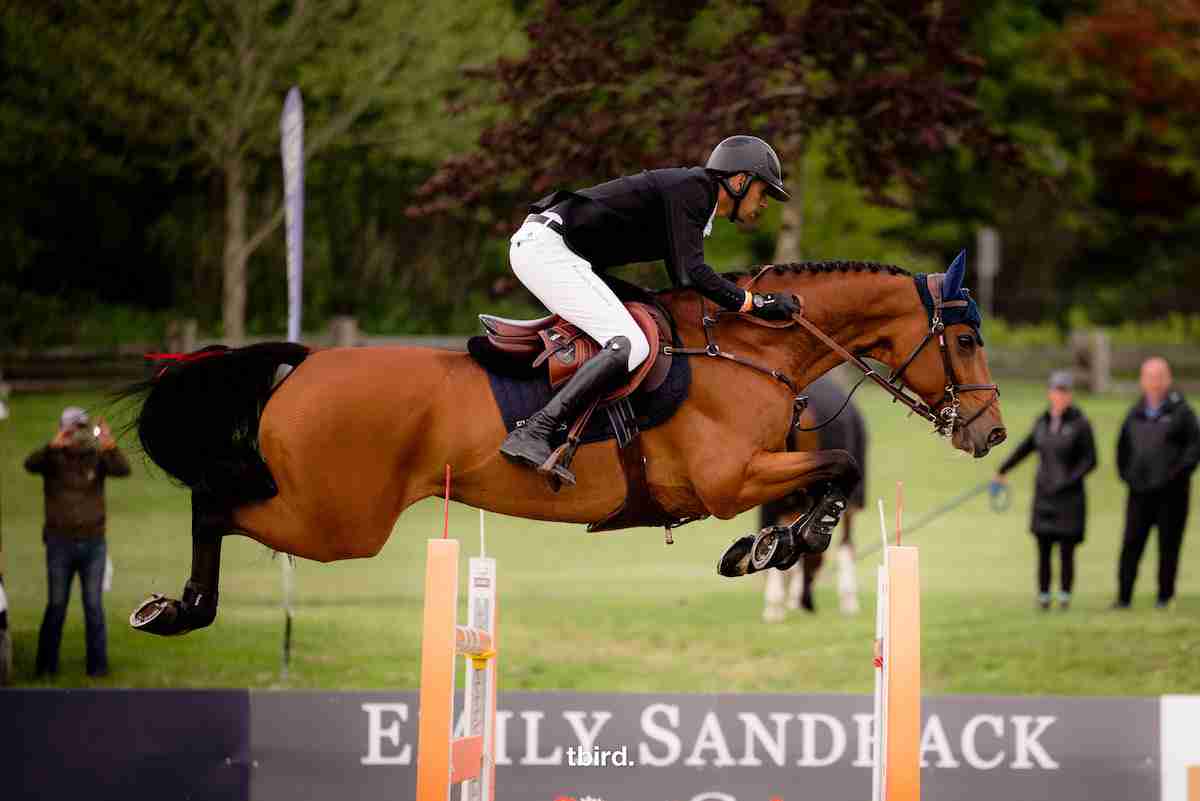 Langley, BC – May 27, 2022 – International competition resumed Friday at Thunderbird Show Park as athletes braved the rain to jump for significant prize money and coveted qualification for the weekend’s biggest classes. The Fort Grand Prix Arena held three FEI classes, all of which brought thrilling sport to spectators. The day concluded with the $73,400 CabanaCoast 1.50m Jump-Off CSI5*, which was topped by Nayel Nassar and Igor Van De Wittemoere.

The star-studded class, set in a jump-off format, invited each of the 37 athletes to attest the first-round track, set by Peter Grant (CAN), Meghan Rawlins (CAN) and Peter Wong (MAS) and consisting of 12 numbered obstacles with 15 total jumping efforts. Though the course presented challenges and swept across the expanse of the grass arena, both horses and athletes were prepared for success as 20 combinations navigated the first round fault free.

Sixteen of the 20 clears opted to return for the short course to battle it out for the top spot and the lion’s share of the prize money. Bond set the pace early, returning to the ring with her Olympic mount, an 11-year-old Westphalian gelding, and setting the time to beat at 45.36 seconds. The ensuing rounds would prove Bond left very little on the table, as several pairs clocked in with double-clear efforts just shy of her time, despite their best efforts to turn sharply and gallop across the long runs between fences.

It wasn’t until Nassar, who came in third to last to jump off, that the target Bond set was beaten. Nassar guided the 14-year-old Belgian Warmblood gelding, owned by Evergate Stables, neatly around the rollback turns and opened the small horse’s stride as wide as he could to gallop home and cross the timers in 44.26 seconds, snatching the lead and placing Bond into second. As the class drew to a close, Nassar took the win, Bond claimed second and third place went to Swail and Theo 160 in a jump-off time of 45.55.

“‘Igor’ has natural foot speed, so the goal is always to just get him in that rhythm and keep him there, instead of trying to push him out of it and then shorten him back up. So the plan worked out today.”

Nassar and his Olympic partner have been together since 2020. “The first six months were a little complicated,” he explained. “He’s a very sensitive horse with a lot of blood. We just had to put the pieces together on the flat work, try to work on our trust, and get him to relax a little bit. And since then, he’s really stepped up and been my best horse. He’s the one I rely on for the biggest classes that I jump. He was the one I relied on in Tokyo last year. So this was actually a nice walk in the park for him.”

According to Nassar’s own JUMPR App, his top mount boasts an all-time clear round rate of 43% over 197 international starts, 110 of which have been with Nassar in the irons. At the 1.50m height, the pair have placed in the top 10 in 47% of the classes they’ve jumped.