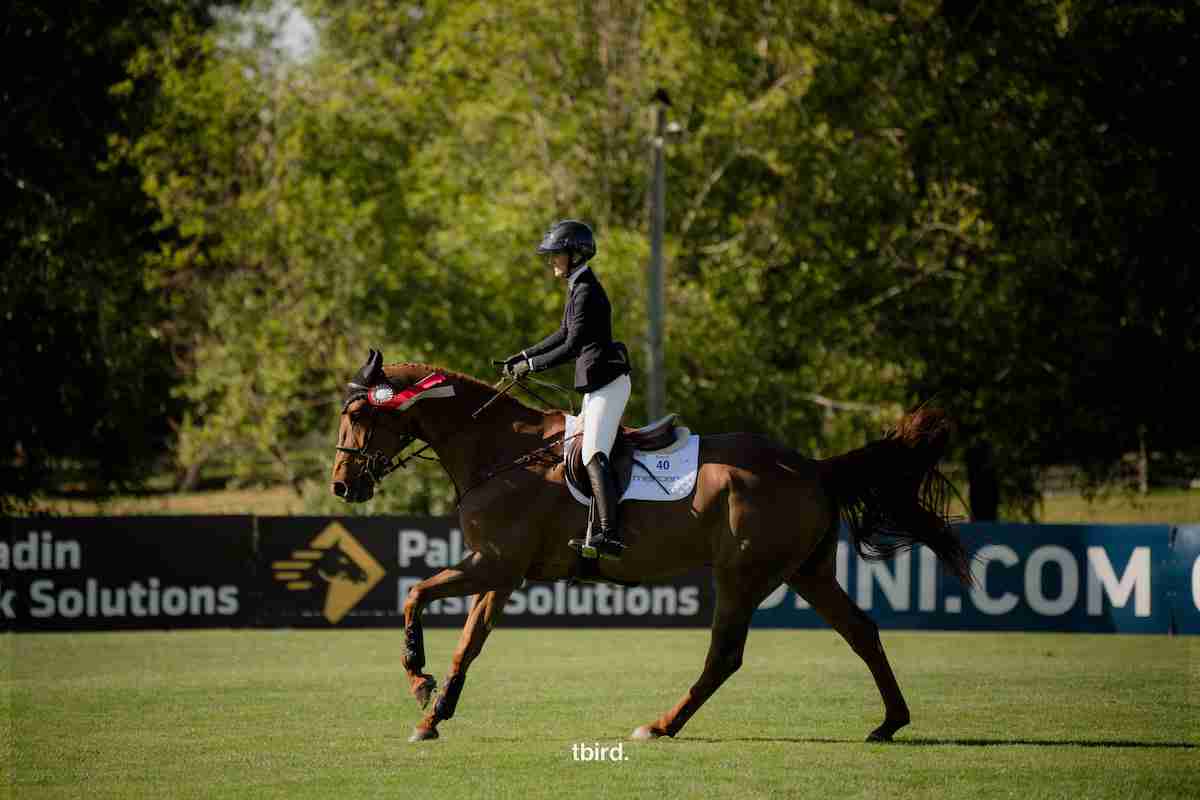 If someone had told Hayley Mercer (CAN) she would be winning U25 classes with her partner Crown Royal when she bought him as a 5-year-old, she probably would not have believed it. Thursday afternoon at Thunderbird Show Park, the now 11-year-old Canadian Sport Horse gelding, did precisely that, helping her secure the win in the $5,000 MarBill Hill U25 League 1.35m.

Mercer kicked off the West Coast Classic on a high note, joining other top U25 athletes in reacclimating to the atmosphere of the Fort Grand Prix Arena.

Five combinations navigated the first round of the course, set by Peter Holmes, clear and within the 79 second time allowed to advanced into the jump-off. Of those, all jumped double-clear efforts, but none could catch Mercer and Crown Royal.

Using the gelding’s massive stride, the pair set a time of 43.44 seconds to take the win, omitting a stride down each of the middle lines in the arena, a move few others could replicate. Jarne Francken (USA) followed closely behind in second place with Enzo in a time of 44.29 seconds, while Kassidy Keith (CAN) took third with Fenelon WF in 46.08 seconds.

Crown Royal has far exceeded expectation as he came into Mercer’s ownership as a sales horse, but the pair’s bond quickly proved to be special as she took him to prestigious equitation finals and moved up the ranks of national—and into international—show jumping.

“He’s definitely my soul mate,” Mercer, 22, said of Crown Royal. “I’ve had him since he was five, and he actually was my equitation horse. We went to Toronto and did CET Finals together in 2017 and 2018. We’ve grown up together and have been moving up every year. We did the CSI2* [at tbird] and have been doing more FEI classes. It’s been such a fun ride. He’s my rock and I don’t know what I would do without him.”

It became clear as the pair’s partnership developed that the horse wasn’t going anywhere. “As we got to know him we realized he’s too special and we couldn’t get rid of him,” Mercer continued. “We kept him and now he’s never leaving. He’s going to retire with me.”

Mercer and Crown Royal are coming off top placings in CSI2* competition in the spring at tbird, having jumped clear rounds against elite competition. Last season, the pair finished fourth overall in the MarBill Hill U25 series. According to JUMPR App, Crown Royal boasts a 50% clear round rate at 1.40m, which bodes well for the next two U25 classes they will face at tbird, both at the 1.40m height.

“He’s very chill,” Mercer continued, despite the incredible speed the pair demonstrated in Thursday’s victory. “We nickname him ‘the surfer dude’ because he has such a chill personality, but he does have a little spice underneath. He’s super big, but you feel like you’re going fast on him.”

Mercer will contend for top placings in the remaining classes in the week’s division.

“The U25 is a super fun division for me because all my peers I’ve grown up with at tbird are here doing it so you know it’s a high level of competition,” she remarked on the MarBill Hill U25 series. “You’re never thinking it’s going to be an easy class. I’m a competitive person myself so I really love that. It puts you in classes that set you up for CSI2* and CSI3* classes and makes you feel important when you get to be in the Sunday MarBill Hill Grand Prix. It gives you the feeling that you’re meant to be there.”