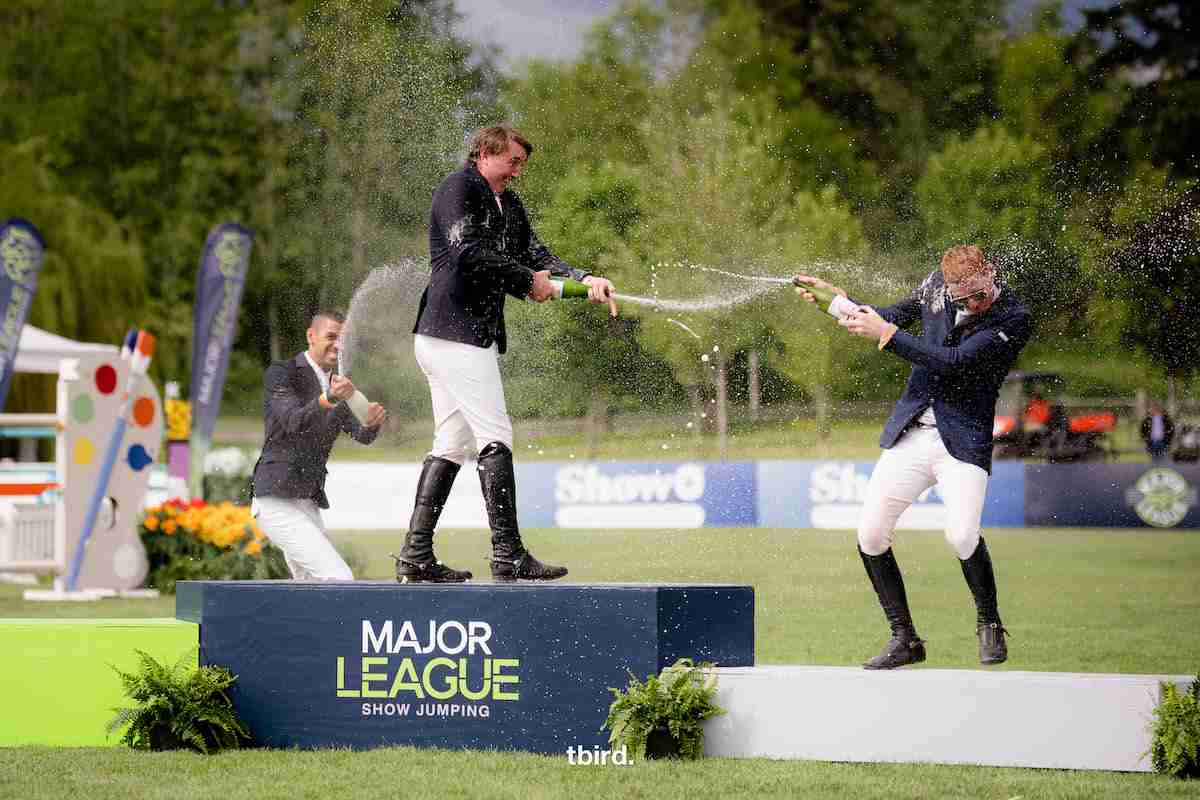 Langley, BC – May 29, 2022 – In a jump-off of 10 of North America’s finest riders, at first glance, it appeared as though the $218,000 CSI5* Major League Show Jumping Grand Prix at Thunderbird Show Park would be decided only after the lead had changed hands several times.

No one told Jordan Coyle (IRL).

Returning second over Peter Grant’s (CAN) shortened course, with the likes of Nayel Nassar (EGY), Beezie Madden (USA), Kent Farrington (USA) and brother Daniel Coyle (IRL) behind him in the lineup, Coyle and Elan Farm’s Ariso laid down a performance that simply could not be caught. In fact, even as riders took greater and greater risks on course, it wasn’t even all that close.

Coyle ran away with the opening five-star grand prix of the 2022 Major League Show Jumping season, crossing the finish timers in 45.89 seconds, nearly a full second faster than Nassar and his Tokyo Olympic mount, Igor van de Wittemoere (46.56). Daniel Coyle and Legacy finished third as the only other double-clear performers (46.81).

“Nayel on that horse is very, very, very fast. We had Kent, one of the best in the world, in my opinion, at everything. Daniel, I suppose you could say is not bad also,” Jordan said, alluding to his sibling rivalry. “I just felt like if if I could go as fast as [Ariso] can go, it would be pretty hard for everyone else to catch me, and lucky enough, it all worked out.”

Coyle has picked up right where he left off when it comes to MLSJ, which launched in 2021 with an innovative team competition and 10 new five-star events in North America. He and Ariso won the inaugural series’ finale at the Desert Horse Park in California (USA) in December. That victory marked Coyle’s first CSI5* Grand Prix victory, and it hasn’t taken him long to add another at the highest level of show jumping competition.

“People can say whatever they want about this, but when you’re going that speed, everything kind of has to come up for you. I was very lucky today,” Coyle said. “Everything came up, and in the warm-up today in between the first round and the jump-off, [Ariso] was jumping over the standards. So I was like, ‘Okay. Today’s the day that we go and try and have a win at this.'”

Coyle’s instincts were right, and he relied on them as he tackled the short course. Grant’s track offered a lot of room to gallop between the fences, and while some riders tried to beat Coyle with tight rollbacks and inside turns, he and his mount simply outran them. The technical strategy, stride numbers and all, were put aside.

“When I walk the courses, obviously I walk all the strides, but it’s very simple for me, because it’s [either set on a normal stride], or you slow down, or you go faster,” Coyle explained. “I think people get too technical with all the other things that happen in the middle sometimes. I’m sure it wouldn’t work for everyone, but it must work for me.”

Thunderbird Show Park was originally on the 2021 MLSJ schedule, but travel restrictions due to the ongoing pandemic forced its cancellation. In 2022, the venue has reached a new milestone: For the first time in its history, it will host back-to-back five-star events, with this week’s CSI5*/CSI2* Canadian Premier followed immediately by the CSIO5*/CSI2* Odlum Brown BC Open, featuring the $235,000 CSIO5* Longines Grand Prix on Friday, June 3 and the $400,000 CSIO5* Longines FEI Jumping Nations Cup™ of Canada on Sunday, June 5.

“It’s really great to see so many new faces here, but it’s even better to see [Jordan Coyle, Daniel Coyle and Nayel Nassar]. They’ve all won here before, and it’s nice that they’re back sitting beside me,” said tbird President Chris Pack. “We’re just really appreciative of the effort that Major League puts in to promote the sport and to be exciting. I think that showed not only in last night’s [team competition], but also in today’s [Grand Prix]. I think you can have great sport and some fun, too.”