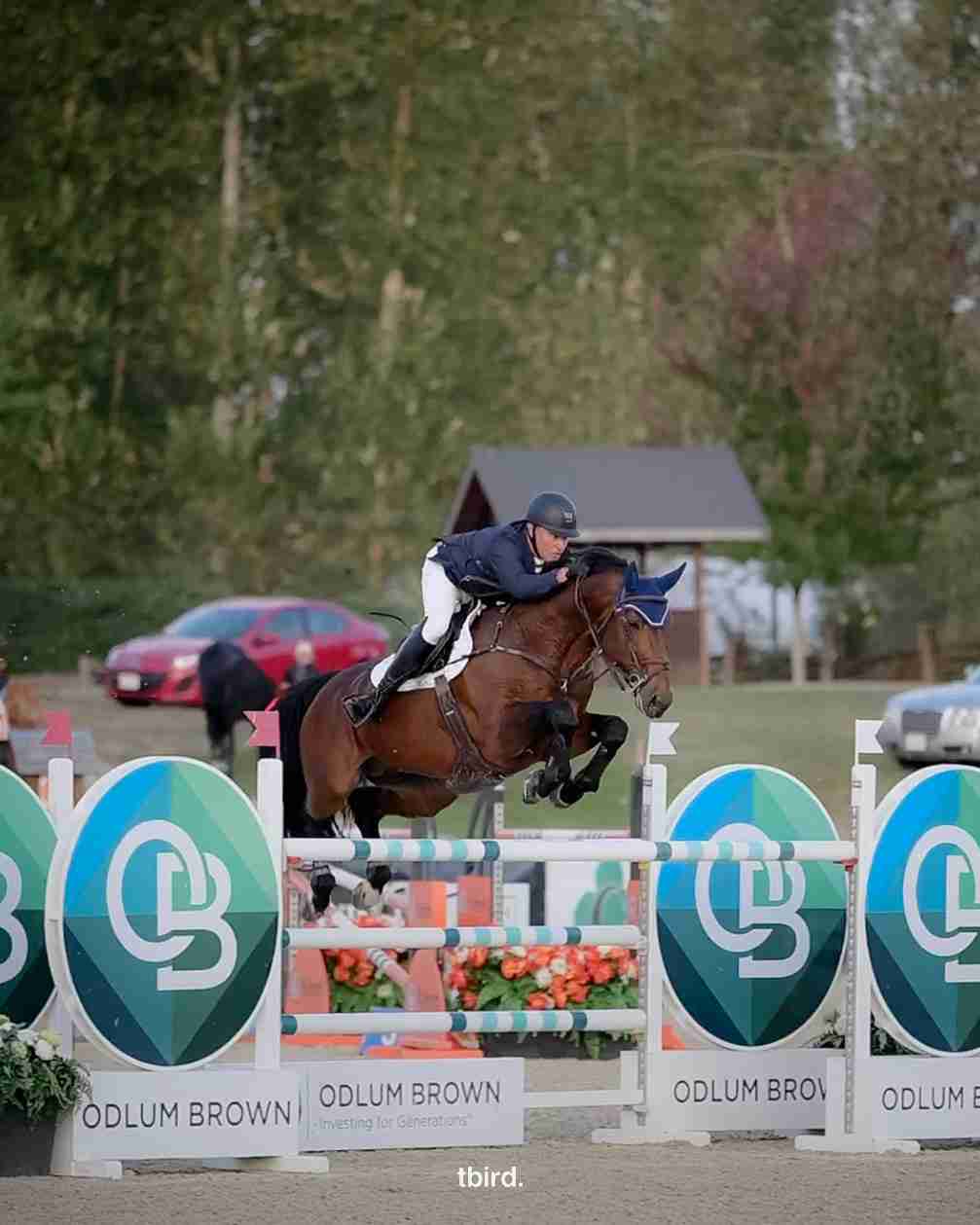 Langley, BC – Jim Ifko (CAN) had a specific plan of attack Thursday for the large 13-horse jump-off that had assembled for the CSI3* tbird Qualifier 1.45m.

Ifko identified two distinct gallop lanes in Peter Holmes’ (CAN) short track, and he knew his competitors would be making the most of those opportunities. He hoped he could set himself apart with tighter turns, and his longtime partner Un Diamant des Forets quickly understood the assignment.

“It was amazing. One turn, we turned a lot shorter than I was expecting. All I did was land and look to left and all of a sudden, he was gone!” Ifko explained. “As soon as I looked, he was on his way, and it nearly caught me by surprise.”

Ifko and “Monty” sped right to the top of the class, recording their 11th career international victory with a winning time of 37.37 seconds. Uma O’Neill (NZL) and Clockwise of Greenhill Z galloped into second (39.13), just ahead of Bretton Chad (CAN) and Grandeur WP (39.18), in a class where the lead changed hands numerous times.

“He’s definitely confident and courageous. He’s an absolute adrenaline junkie. His need for speed is remarkable,” Ifko said. “Yet at home, he’s the sweetest, kindest horse and so quiet. I think when you see him at a show, it’s like Jekyll and Hyde.”

Ifko has sensed his partner’s inherent competitiveness from the moment he first sat on the horse—now eight years ago—but he continues to be surprised at the ease with which his mount steps up to new levels. Over the summer, the pair recorded a pair of CSI5* victories at Spruce Meadows. According to JUMPR App, they jump clear 43% of the time across heights from 1.40m to 1.60m.

“From that moment that I tried him, you just got that sense that there was something special there. He has so much heart and so much try,” Ifko said. “It’s really made it an incredible journey to step up through the levels. It doesn’t matter which level we try to move up to; he’s always giving 110% percent and wants it as badly as you, if not more.”

And the bay seems to have more to give. Monty has been a popular breeding stallion at Eventyre Farms in DeWinton for the last five years, and Ifko is bringing up many of his offspring. Five-year-old Mo Money is also competing at tbird in the 1.20m division.