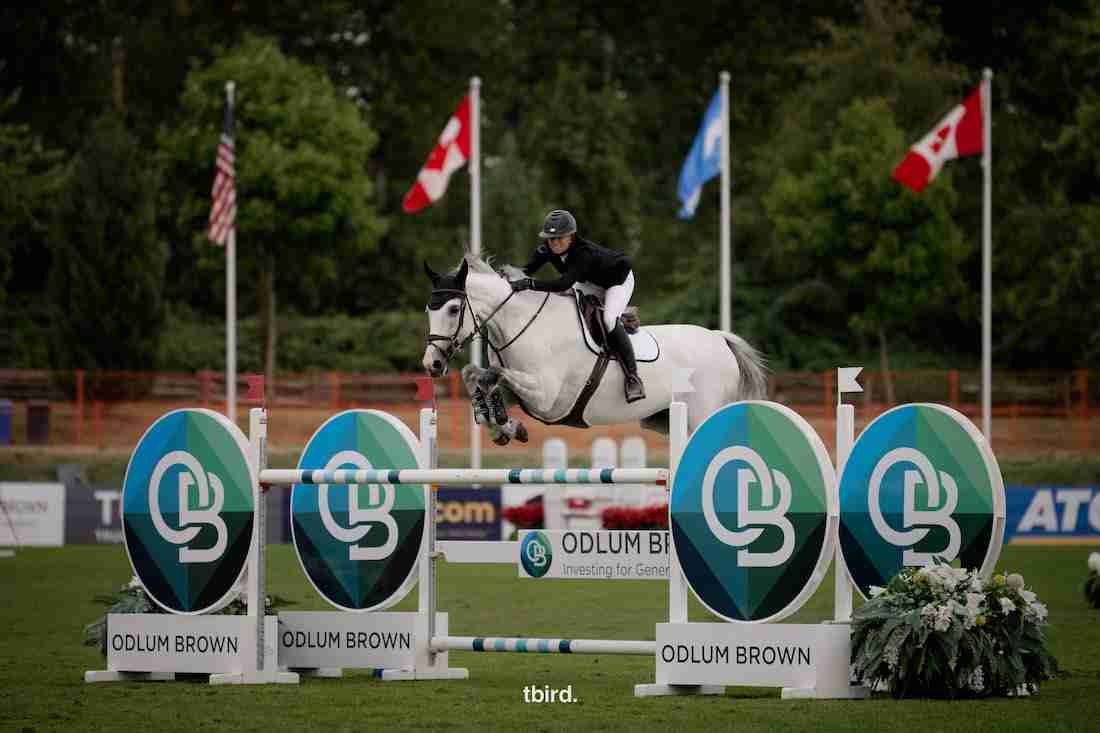 Langley, BC – As amateur rider Jaimie Ackerman (CAN) crossed the finish timers in the jump-off of the CSI2* tbird 1.45m, her first reaction was one of sheer disbelief.

“It’s a dream. You just don’t expect to go into a CSI2* FEI class when you’re [also] working a full-time job and pull off something like that,” she said.

But that doesn’t mean she wasn’t going to give it her best shot. Last to go in an eight-horse jump-off, Ackerman and Driek flew home past the timers of Peter Holmes’ (CAN) short course in 40.29 seconds—nearly three seconds faster than then-leading Brooke Morin (USA) and NKH Carrido (43.23). Jaehee Jeon (KOR) and Kadans van de Mispelaere finished third (43.72 seconds).

“He was unbelievable,” Ackerman said. “There were some questionable long distances there, but he was very good!”

Horse and rider were equally committed as they rounded the turn past the ingate and sighted in on the jump-off’s third fence. They took a bold, long distance at that oxer and carried their forward momentum toward the double that followed, getting down the line in one less stride than their competitors. They only pulled away from there.

“I really was committed. That oxer was a hair longer than I wanted it to be, but my horse was golden and took over for me,” Ackerman detailed. “Off that canter, all I saw was the 8 [strides to the double]. I didn’t want to interrupt him too much. It made the double tight, but he backed up and jumped it phenomenally.”

A Vancouver native, Ackerman works full-time as a chiropractor and owns two clinics in the area, offering a variety of physio-massage, acupuncture, chiropractic, and counseling services. But when she acquired the now-14-year-old KWPN gelding Driek three years ago, it set her on the trajectory to international show jumping competition. She made her international debut just one year ago; she’s now won two FEI classes in the last three weeks at Thunderbird Show Park. According to JUMPR App, she and Driek have had 4 faults or less in 73% of their starts at 1.45m.

“I got him in 2019 at this horse show. It’s our three-year anniversary!” she said. “My plan [at the time] was to get into some High Jr/Amateur classes and some local grand prixs. [Driek] had some FEI experience, and the dream [was] to step up to that.”

The pair have proven to be a most competitive match.

“I don’t think I’ve ever ridden a horse so game. He’s always looking for [the next jump]. He loves the job more than any horse I’ve ever sat on,” Ackerman said. “It’s a joy to see a horse having fun with it too. I can point him to almost anything, and he’ll give a solid effort, like he did today!”